Founded in 1924 by the brother of Adi Dassler (adidas founder), Puma is one of the leading suppliers of football boots in the world. The first Puma football boot, The Atom, launched in 1948, followed by the first ever boot with screw-in studs, the Super Atom in 1952.

Puma’s reputation for producing technical football boots increased with endorsement deals for worldwide stars like Pelé (1970), Maradona (1982, 1986) and Lothar Matthäus (1990) who all wore Puma boots, whilst leading their countries to world cup success.

Following on from the legendary Puma King Boot, the German brand now have a line of worthy successors packed full of innovation to take the brand forward. Puma current collections are:


The Benefits of Puma Football Boots

Puma’s current range of boot has different performance benefits depending on the boot you choose. If you take the classic Puma King for example, the boot is lightweight and built with quality materials that ensure its durability. Players will get an increased feeling when controlling the ball thanks to the soft leather upper. Similar to most Puma boots, the outsole comprises a Pebax material which is lightweight and offers great protection. 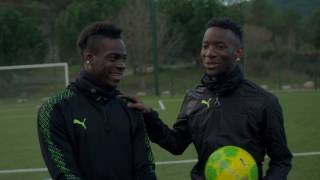